(To see the resulting pictures from this hack, view the following post):

I have been wanting to get into photography for a while now, especially macro photography, but the price of a decent DSLR camera with a range of lenses is just way to much for me as a poor student at the moment. I don’t even own a compact camera, although the camera on my Nokia N95 is pretty good. I recently acquired a broken Nikon Coolpix L3 camera which I attempted to fix. The lens was stuck out and it was reporting, surprisingly enough, “Lens Error”. I had nothing to lose with it so I began disassembling the body in hope of fixing the lens. It took a while to get it all open, but once I had I noticed tiny lens in front of the CCD, and thought to myself “I wonder if I can use this for other purposes”. Initially I though about some sort of home made extreme zoom for the N95. 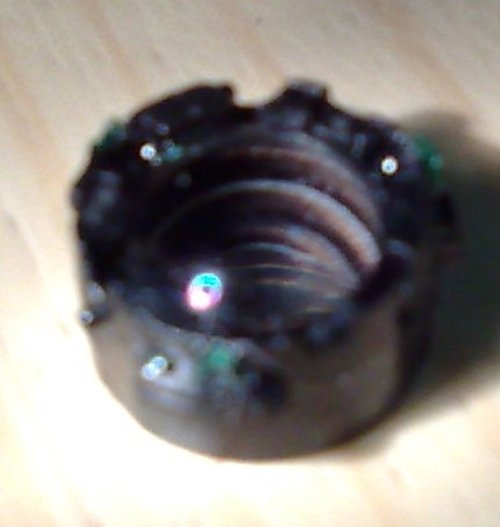 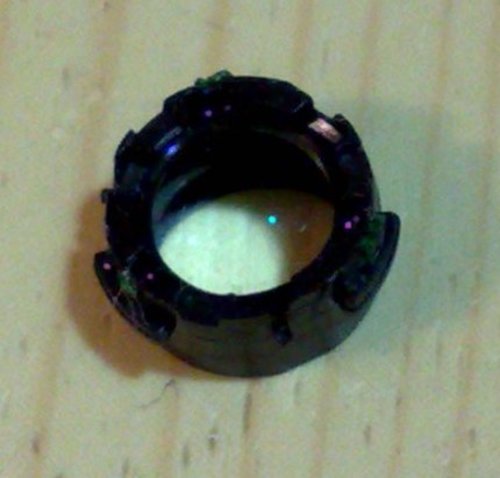 I carefully prized out the lens and began trying to hold it in front of the camera phone’s lens, trying to get something in focus. It took a while of trial and error but eventually I saw something flash up in focus. This lens would be no good for zoom, but looks like an excellent macro lens. Now the N95 does already have it’s own macro / “Close-up-mode”, which I have been fond of for taking pictures of smallish things but it’s nothing like the power of this lens. Another great thing I realised is that the lens sits nicely on the N95’s own lens and can be held in place by gently closing the lens shutter. It’s almost like it was designed for this! (Apologies for the poor quality photo here, the only other camera I have is on an old Nokia 6630) 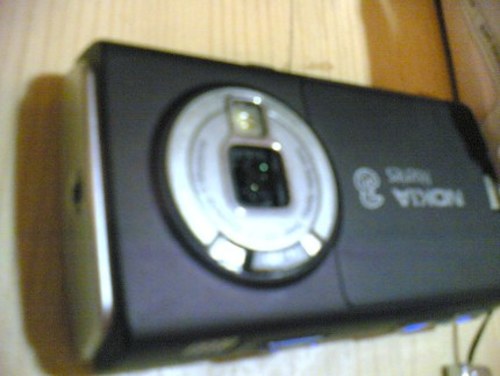 The macro images on the N95 are very dark, but the built in flash seems to be too bright and floods the images, so I’ve been using a little MagLite torch to light up the objects I’ve been photographing. There is also a very small depth of field (I believe you get this with macro photography anyway though) and to focus you have to hold the camera about 4/5 cm away from the object and move it back and forth until you’re in focus. Here’s an example of my setup: 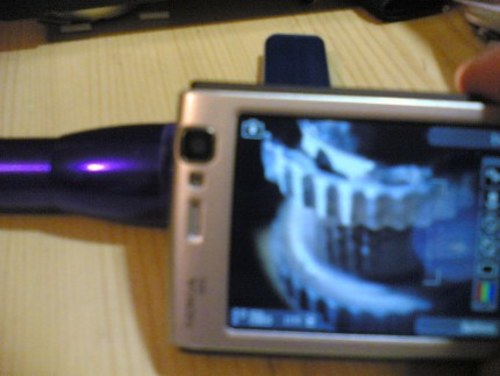 Here you can see the MagLite to the left, a lighter behind the phone, and the thing on screen is the wheel on the top of the lighter!

To make things a little easier, I have the N95 hooked up to a 9” LCD screen via it’s composite video output. The whole thing acts like some sort of electronic desktop microscope.

This particular lens also works well blue-tacked to the camera on my friends I-Phone. One thing I’m not sure about though is if there is a similar lens within every compact camera or if I just struck gold with this one, but if you have a broken camera that you were about to throw out, you may as well give it a go.

I think the results are amazing for such a hack. To see the resulting pictures from this hack, view the following post:

Monitoring the progress of dd

How to monitor the progress of a dd process, even after it has started.

Ampersands & on the command line

Bash scripts and command line examples are often littered with ampersands. Here's what they do.